Wisconsin is represented by major league teams in three sports: football, baseball, and basketball. Lambeau Field, located in Green Bay, Wisconsin, is home to the National Football League’s Green Bay Packers. The Packers have been part of the NFL since the league’s second season in 1921 and hold the record for the most NFL titles, earning the city of Green Bay the nickname “Titletown USA”. The Packers are the smallest city franchise in the NFL, and is the only one owned by shareholders statewide. The franchise was founded by “Curly” Lambeau who played and coached for them. The Green Bay Packers are one of the most successful small-market professional sports franchises in the world and have won 13 NFL championships, including the first two AFL-NFL Championship games (Super Bowls I and II) ,Super Bowl XXXI and Super Bowl XLV . The state’s support of the team is evidenced by the 81,000-person waiting list for season tickets to Lambeau Field. 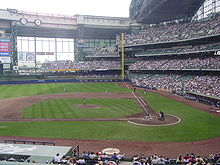 The Milwaukee Brewers, the state’s only major league baseball team, play in Miller Park in Milwaukee, the successor to Milwaukee County Stadium since 2001. In 1982, the Brewers won the American League Championship, marking their most successful season. The team switched from the American League to the National League starting with the 1998 season.

The Milwaukee Bucks of the National Basketball Association play home games at the Bradley Center. The Bucks won the NBA Championship in 1971.

Wisconsin also has many college sports programs, including the Wisconsin Badgers, of the University of Wisconsin–Madison and the Panthers of University of Wisconsin – Milwaukee. The Wisconsin Badgers football former head coach Barry Alvarez led the Badgers to three Rose Bowl championships, including back-to-back victories in 1999 and 2000. The Badger men’s basketball team won the national title in 1941 and made a second trip to college basketball’s Final Four in 2000. The Badgers claimed a historic dual championship in 2006 when both the women’s and men’s hockey teams won national titles.

The Marquette Golden Eagles of the Big East Conference, the state’s other major collegiate program, is known for its men’s basketball team, which, under the direction of Al McGuire, won the NCAA National Championship in 1977. The team returned to the Final Four in 2003.

The Semi-Professional Northern Elite Football League consists of many teams from Wisconsin. The league is made up of former professional, collegiate, and high school players. Teams from Wisconsin include: The Green Bay Gladiators from Green Bay, WI, The Fox Valley Force in Appleton, WI, The Kimberly Storm in Kimberly, WI, The Central Wisconsin Spartans in Wausau, WI, The Eau Claire Crush and the Chippewa Valley Predators from Eau Claire, WI, and the Lake Superior Rage from Superior, WI. The league also has teams in Michigan and Minnesota. Teams play from May until August.

Wisconsin is home to the world’s oldest operational racetrack. The Milwaukee Mile, located in State Fair Park in West Allis held races there long before the Indy 500.

Wisconsin is home to the nation’s oldest operating velodrome in Kenosha where races have been held every year since 1927.

Thank you for contacting us, we'll get back to you shortly.

Sorry, we are unable to send your message at the moment. Please try again later.

"Here to help you with your Real Estate Needs"